First of all, I would like to thank you for taking the time to read this article, and big thanks to Humster3D for inviting me to write it. ‘Oculus’ is my work presented to the Ancient Rome Competition. Hope you will like it.

The first task was to find the theme for my image. My election of the Roman Pantheon was influenced by 2 main reasons:

– Completed in its present form during Hadrian’s reign, in ca. AD 128, is the largest unreinforced concrete dome in the world and remains as one of the most monumental feats of engineering.
– And second, with the Pantheon I wanted to represent one of the most important historical events: The invention of concrete by the ancient Romans, which led to the liberation of the shape from the dictate of the traditional materials of stone and brick. 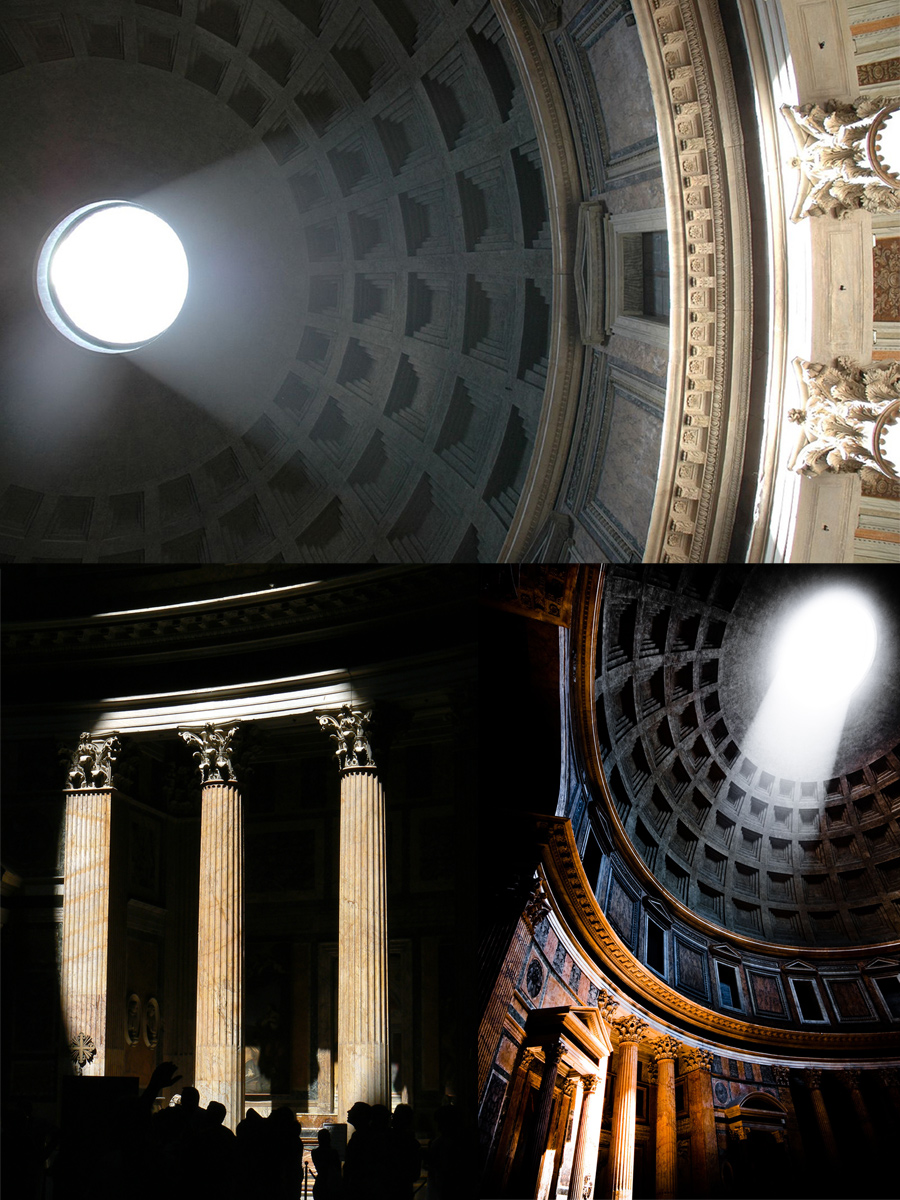 Next step was to search for reference material like: drawings, blueprints, photos, etc. of the Pantheon, this material was crucial to be able to model as close as possible to reality. 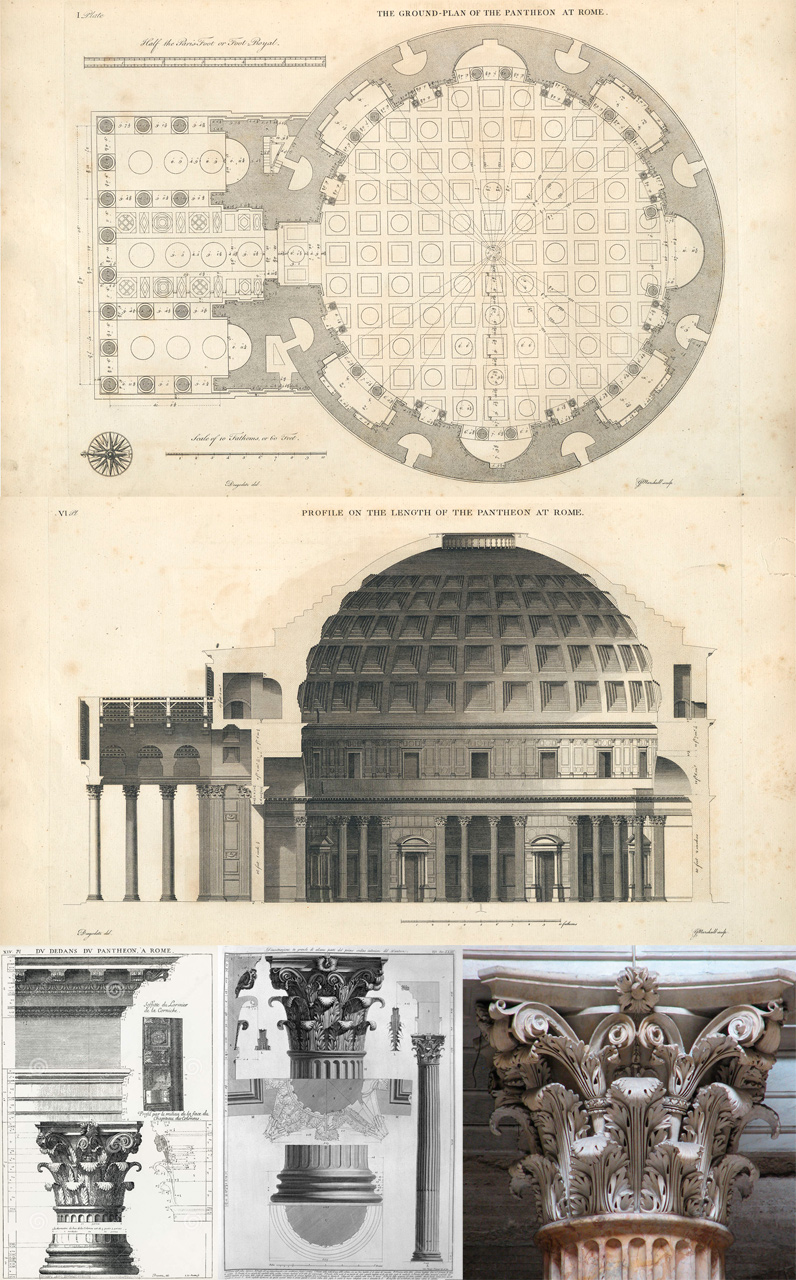 The setup of the scene was done inside SketchUp and Maxwell Render.

In my workflow I used SketchUp to model the general scene and used Blender to pay attention to the details. 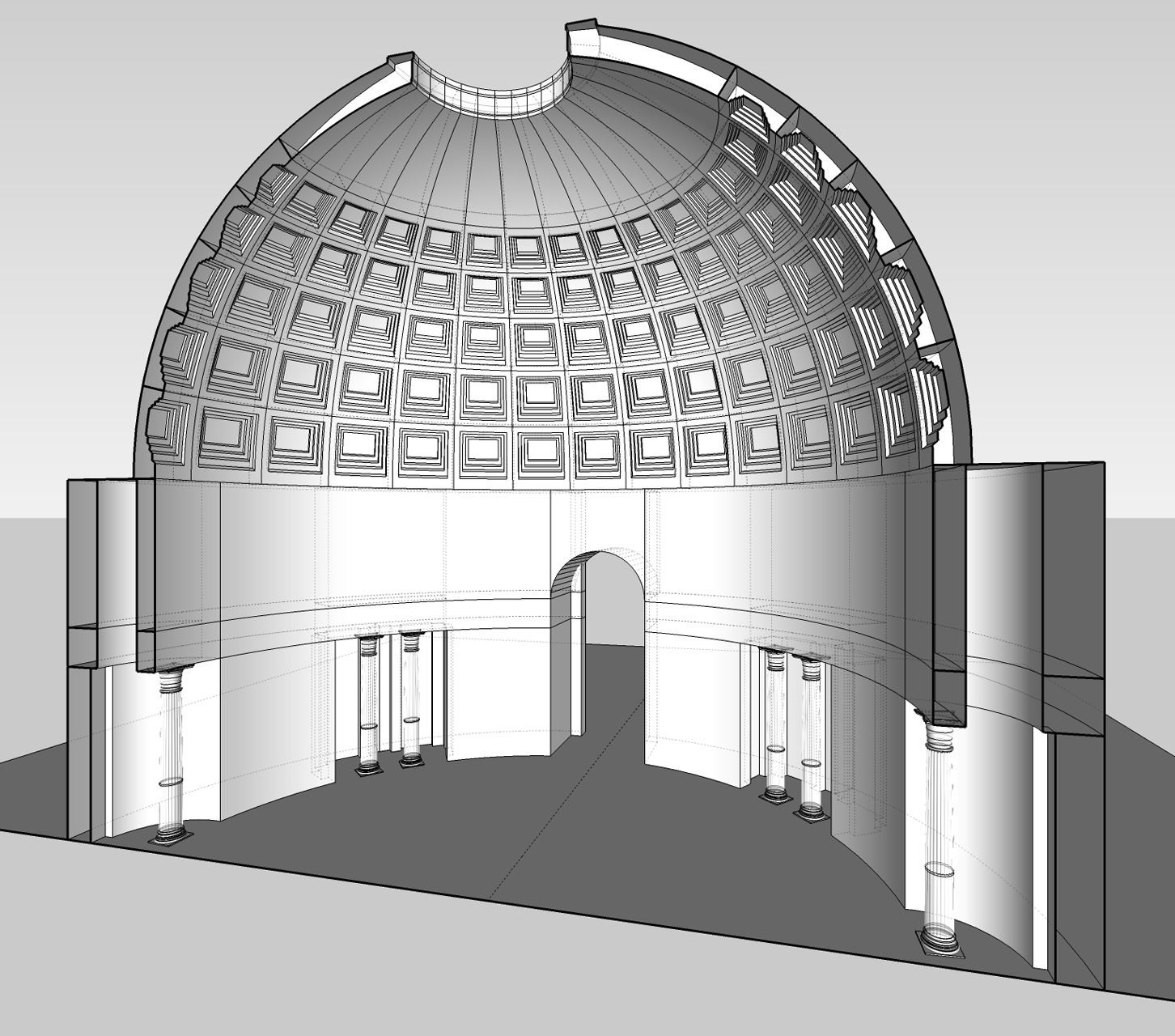 Once the main model of the Pantheon was ready in SketchUp, I started to test with different camera angles, after several trials I was happy with my selected point of view. 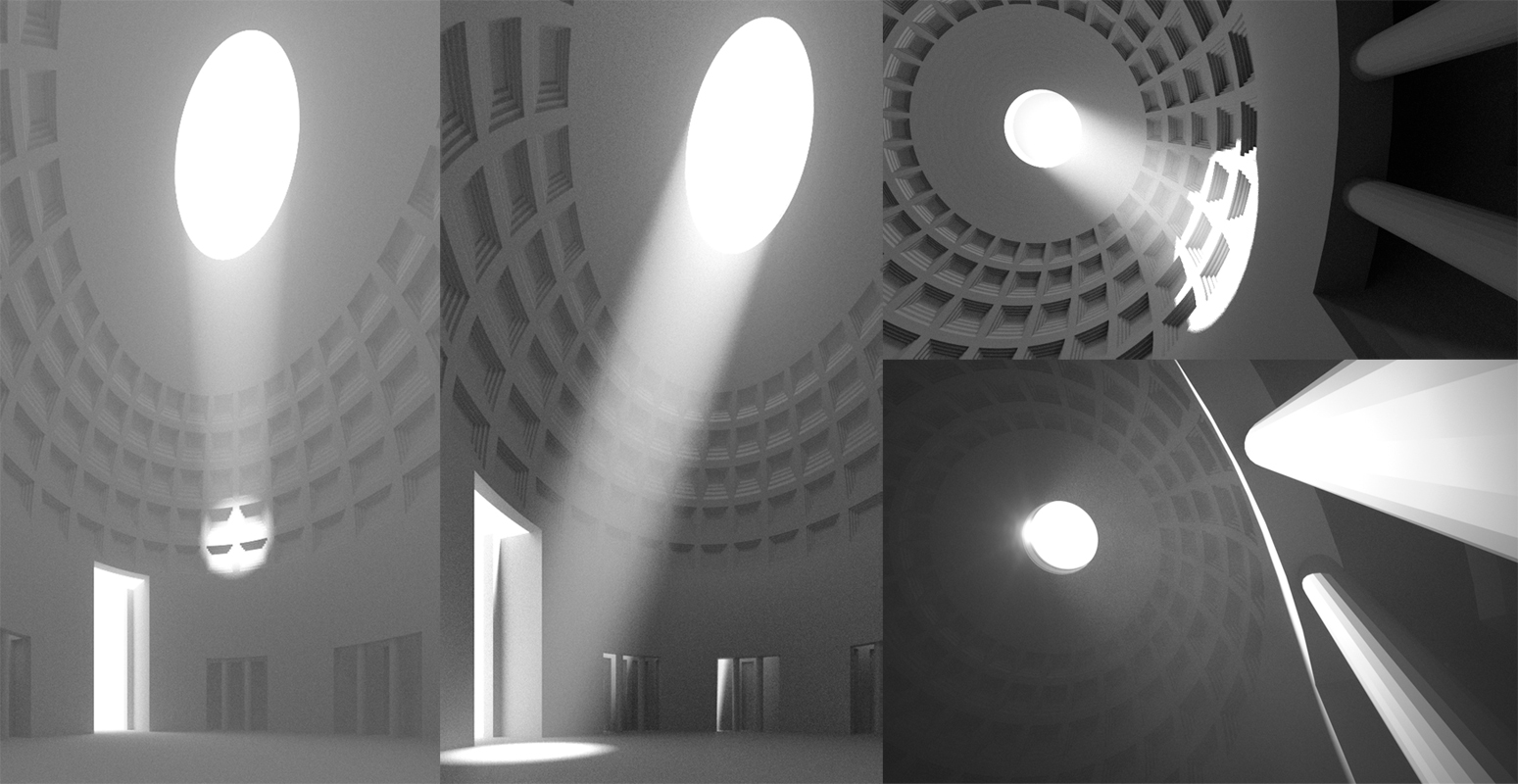 Next step was to add detail to my model only where it was visible to the camera.

I used Blender to model all decorations (Acanthus leaves, volutes, etc.) for cornices and capitals. 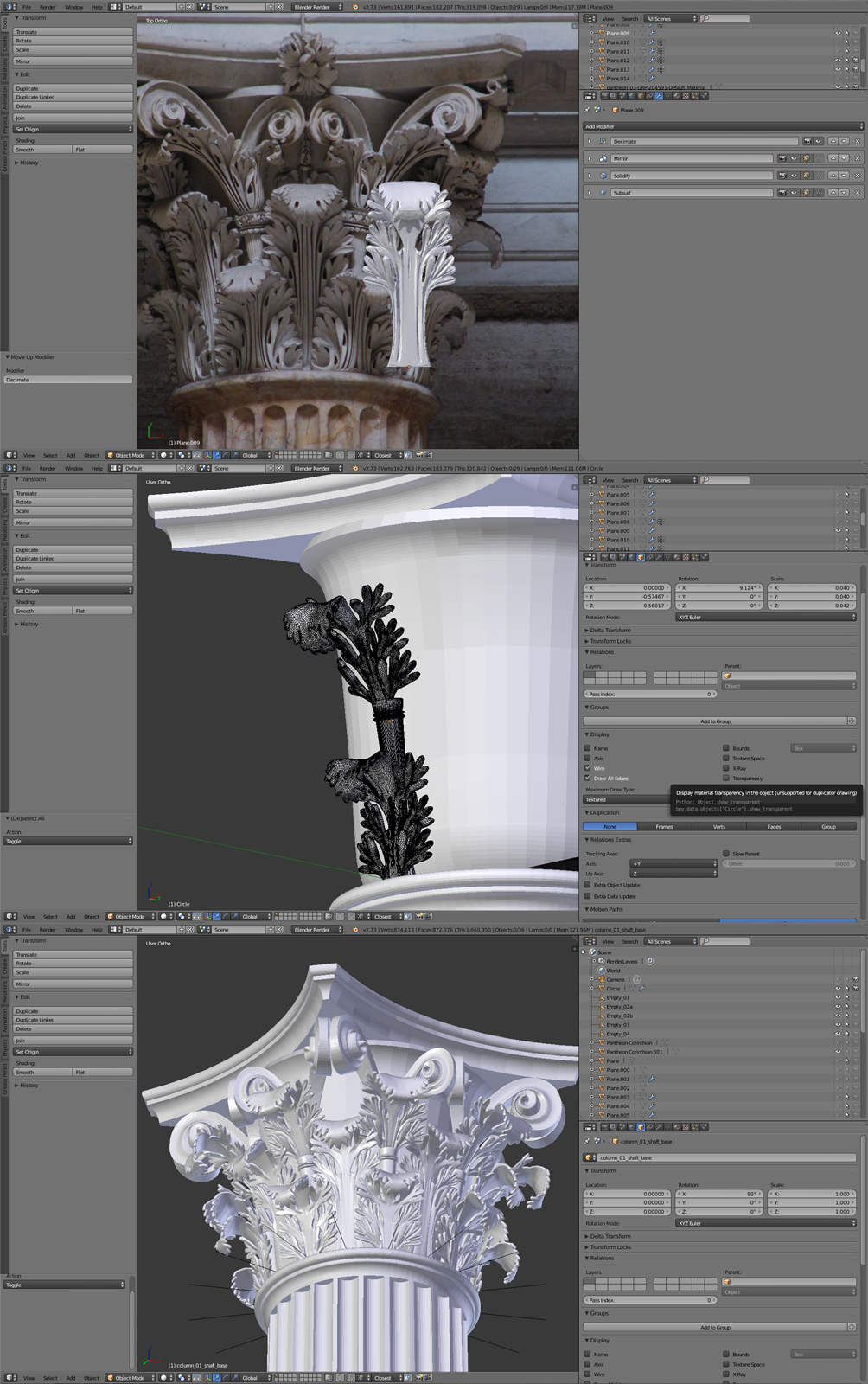 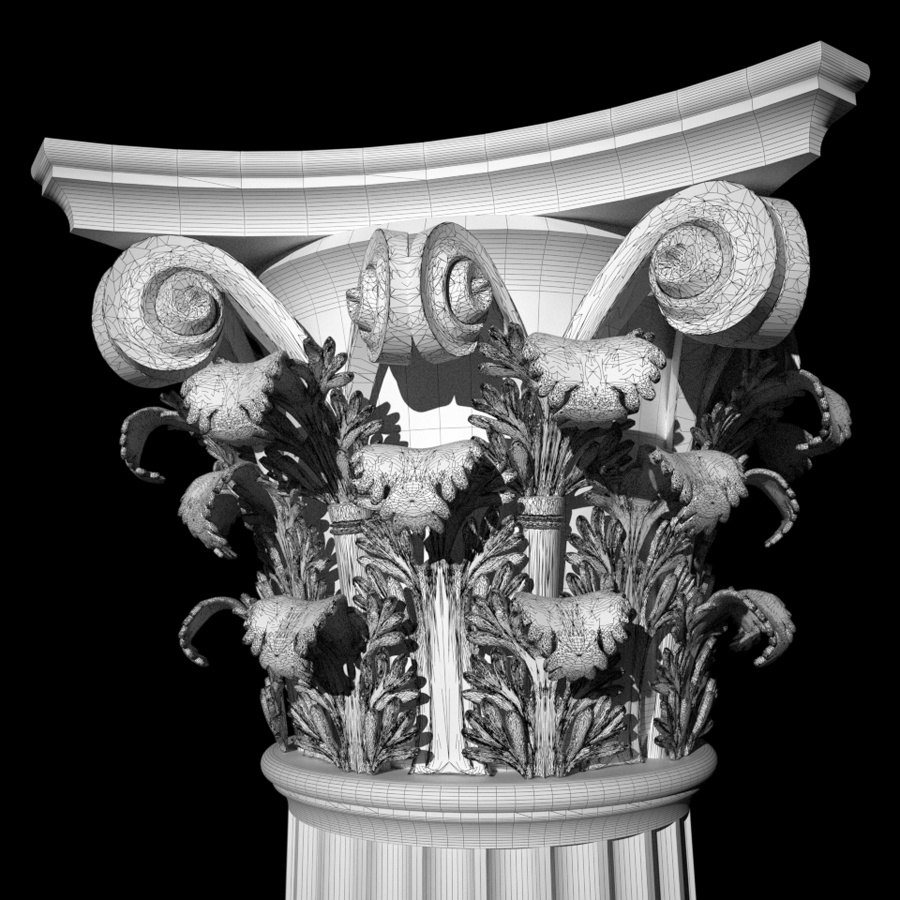 When the Corinthian column was ready with all its ornaments, it was exported to Maxwell Render Studio, using the B-Maxwell (Blender to Maxwell Render exporter add-on), and inserted inside the SketchUp scene as MXS reference, the same process was repeated to insert columns and cornices. 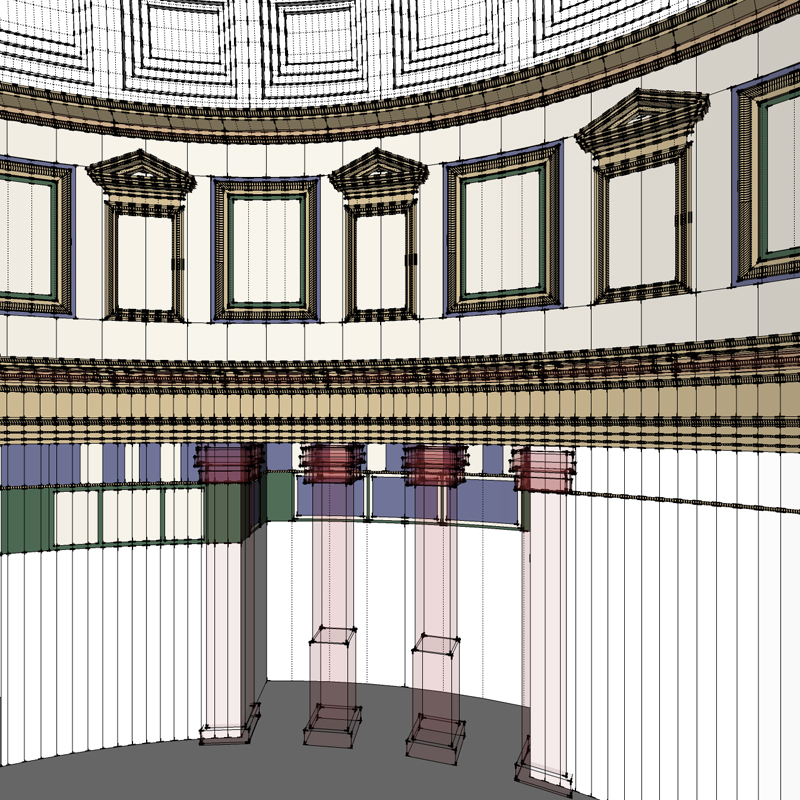 I wanted to catch the real feeling of that architecture and the lighting of the sun coming through the oculus.

The best option to achieve that was the use of Maxwell Render sun and physical sky, it simulates reality in a very exact way.

I intended to use the three-point lighting method, so I added a fill light and two rim lights with very low brightness values. In order to be able to balance the illumination once the render was ready I used Multilight, a very powerful tool inside Maxwell Render, which allows you to adjust the intensity of every light inside the scene once the render is finished. 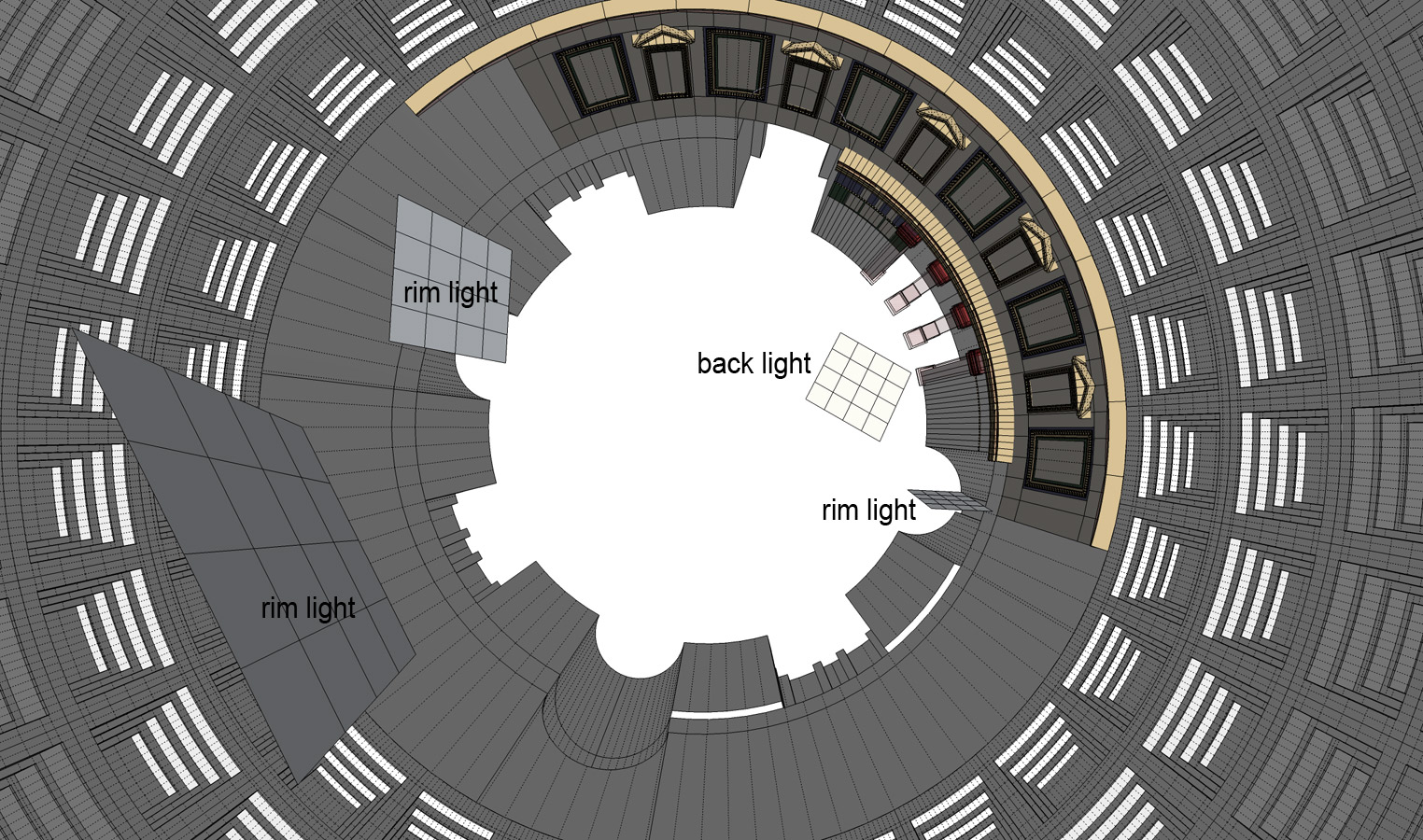 For the marble I used a combination of different marble and noise textures blended together in the procedurals stack. 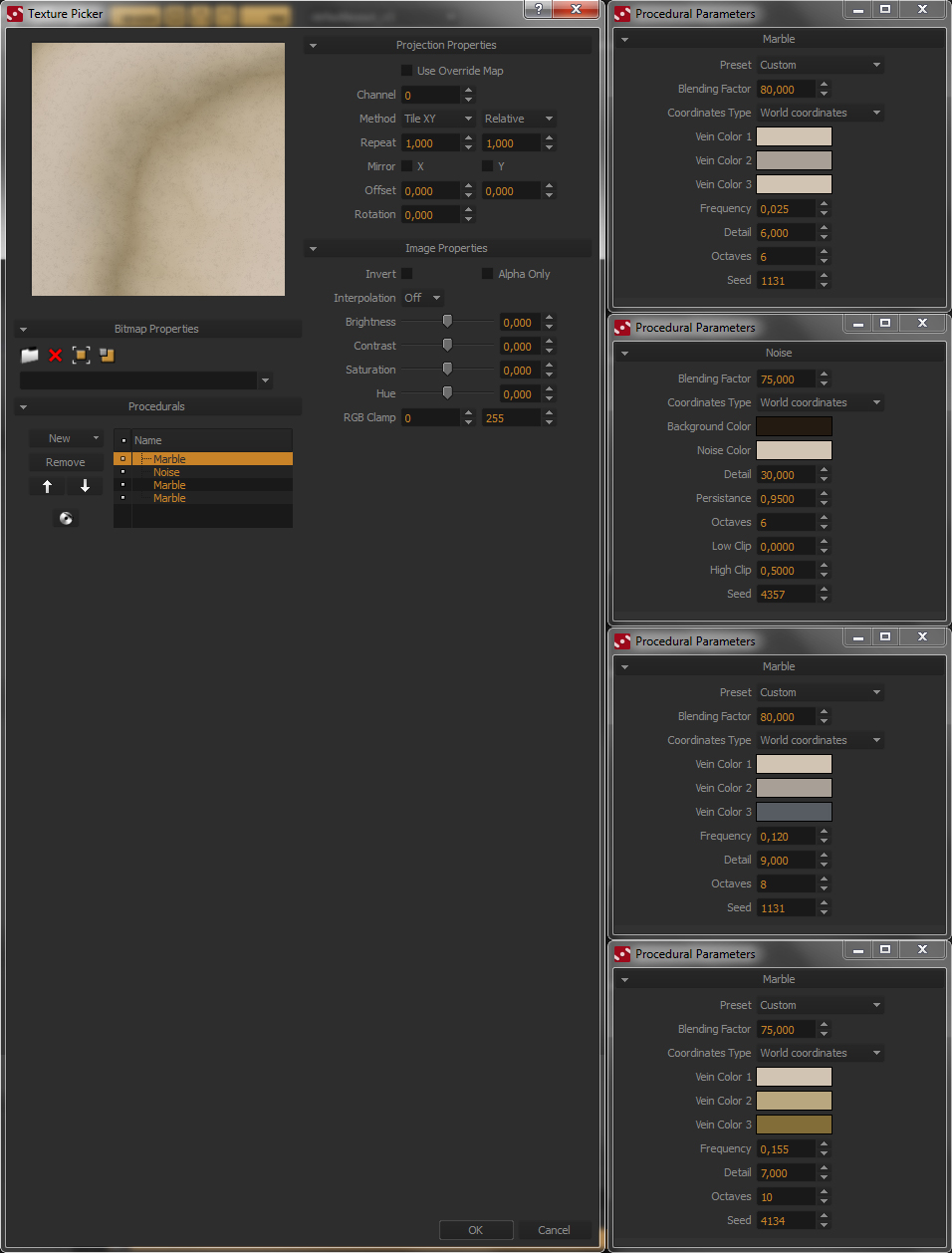 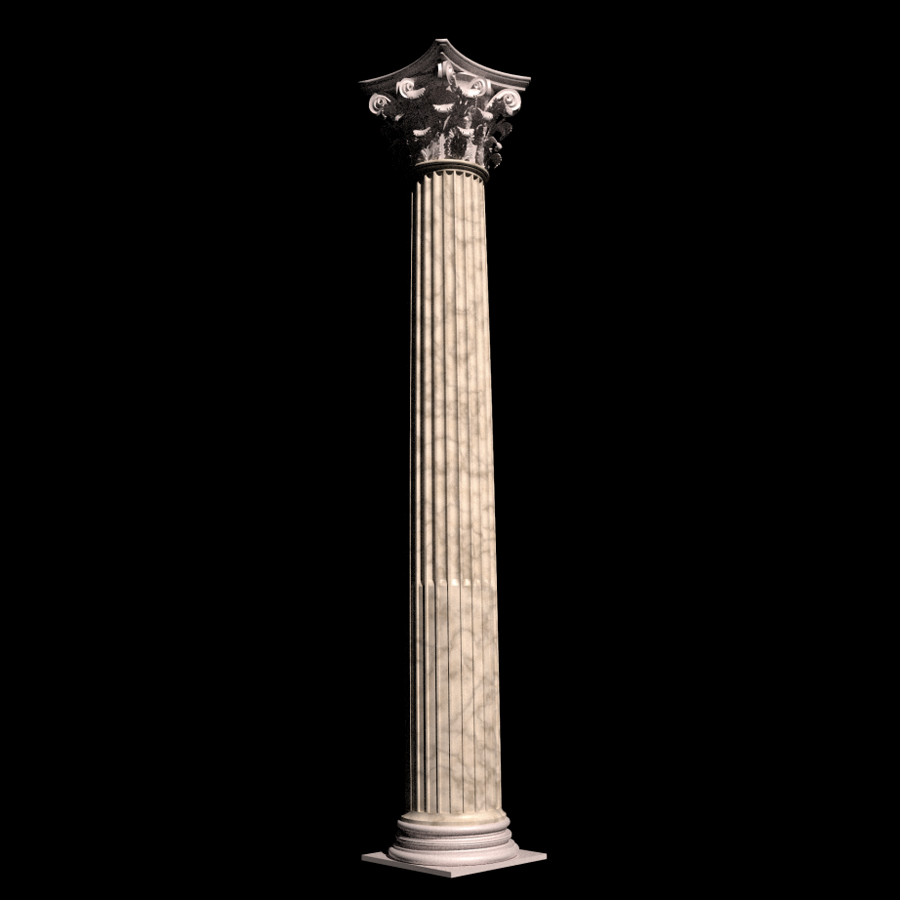 The setup of my scene was done inside SketchUp, Maxwell Render Fire allowed me to visualize that everything had been setup correctly before I exported the whole scene to Maxwell Render Studio.

In Maxwell Studio I did the last adjustments to the camera angle in order to get the correct composition, I adjusted as well the date and time to get the desired position of the physical sun.

Before launching the final render, the multilight feature must be enabled.

When the render process is finished, the resulting image is stored into a MXI file.

At this point I used the multilight feature to balance the illumination, using independent sliders to control each emitter. 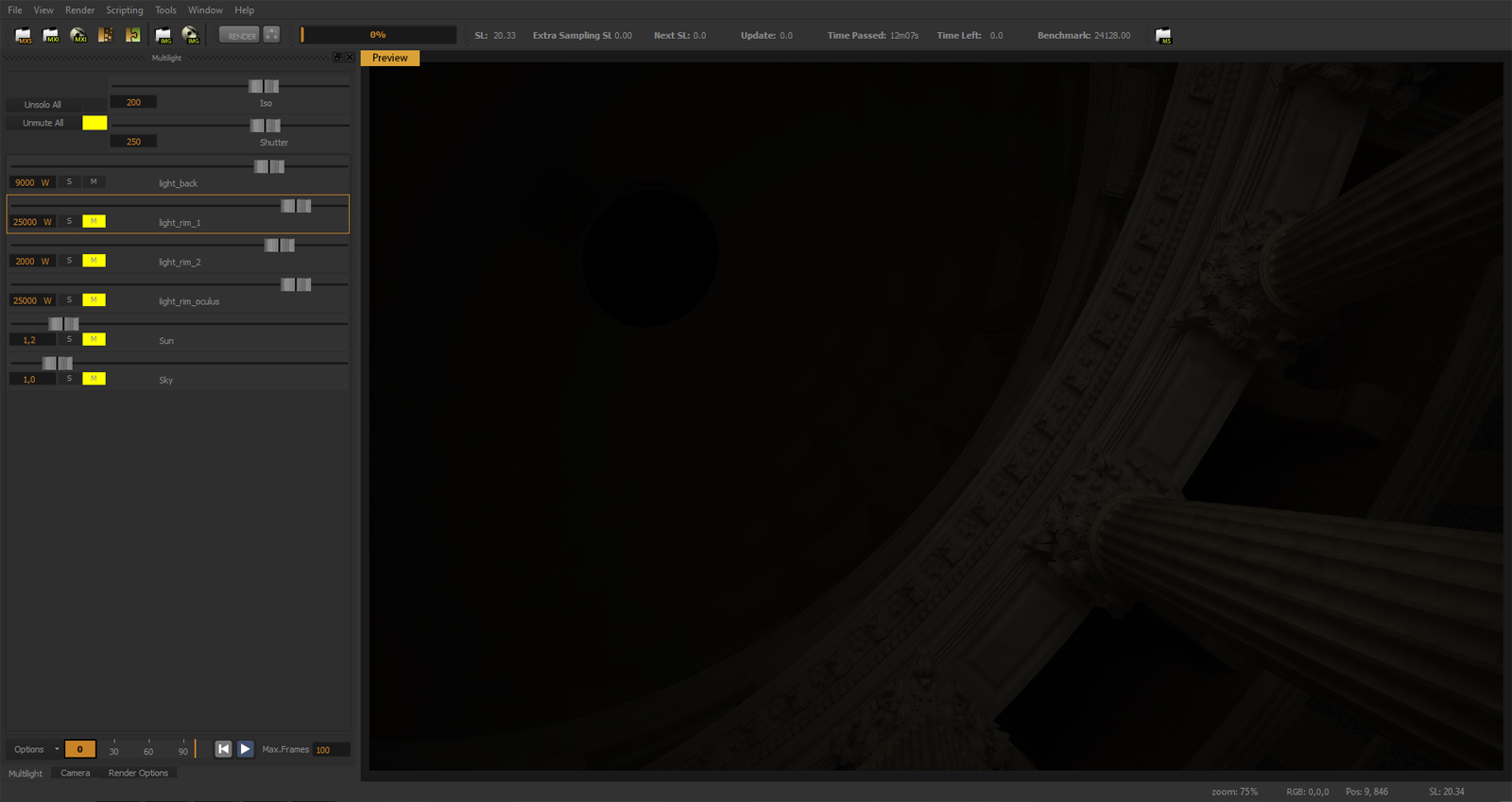 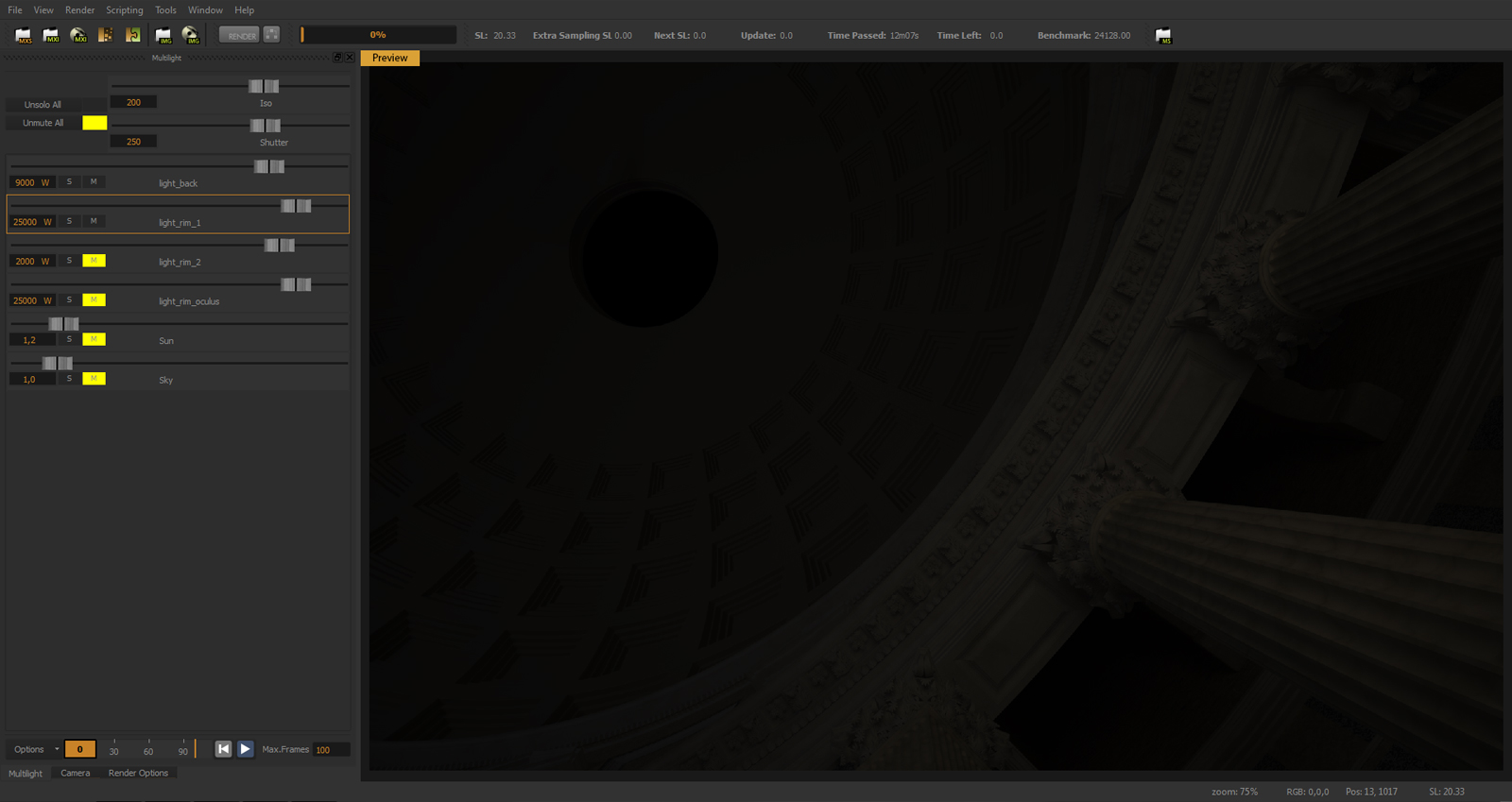 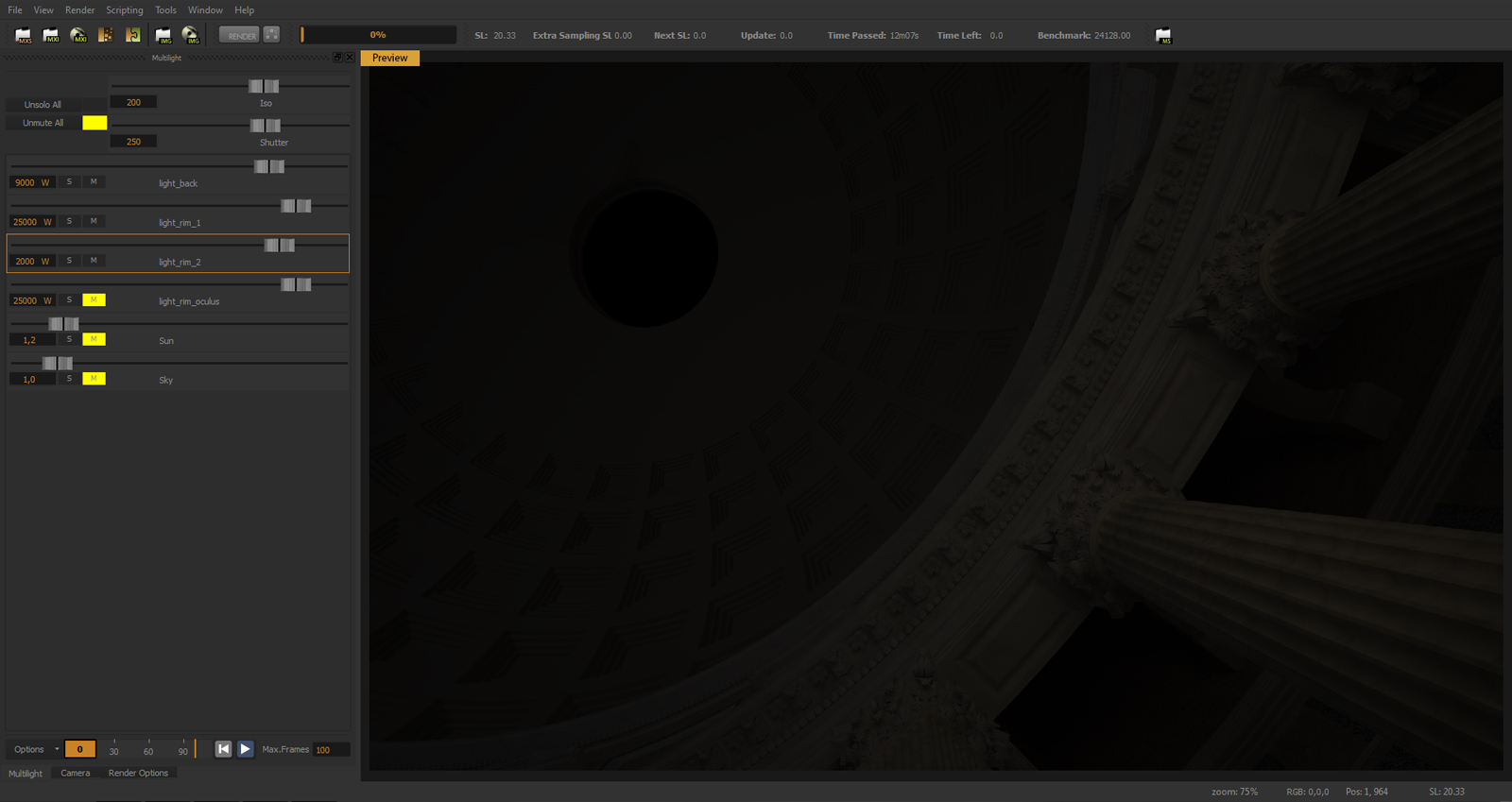 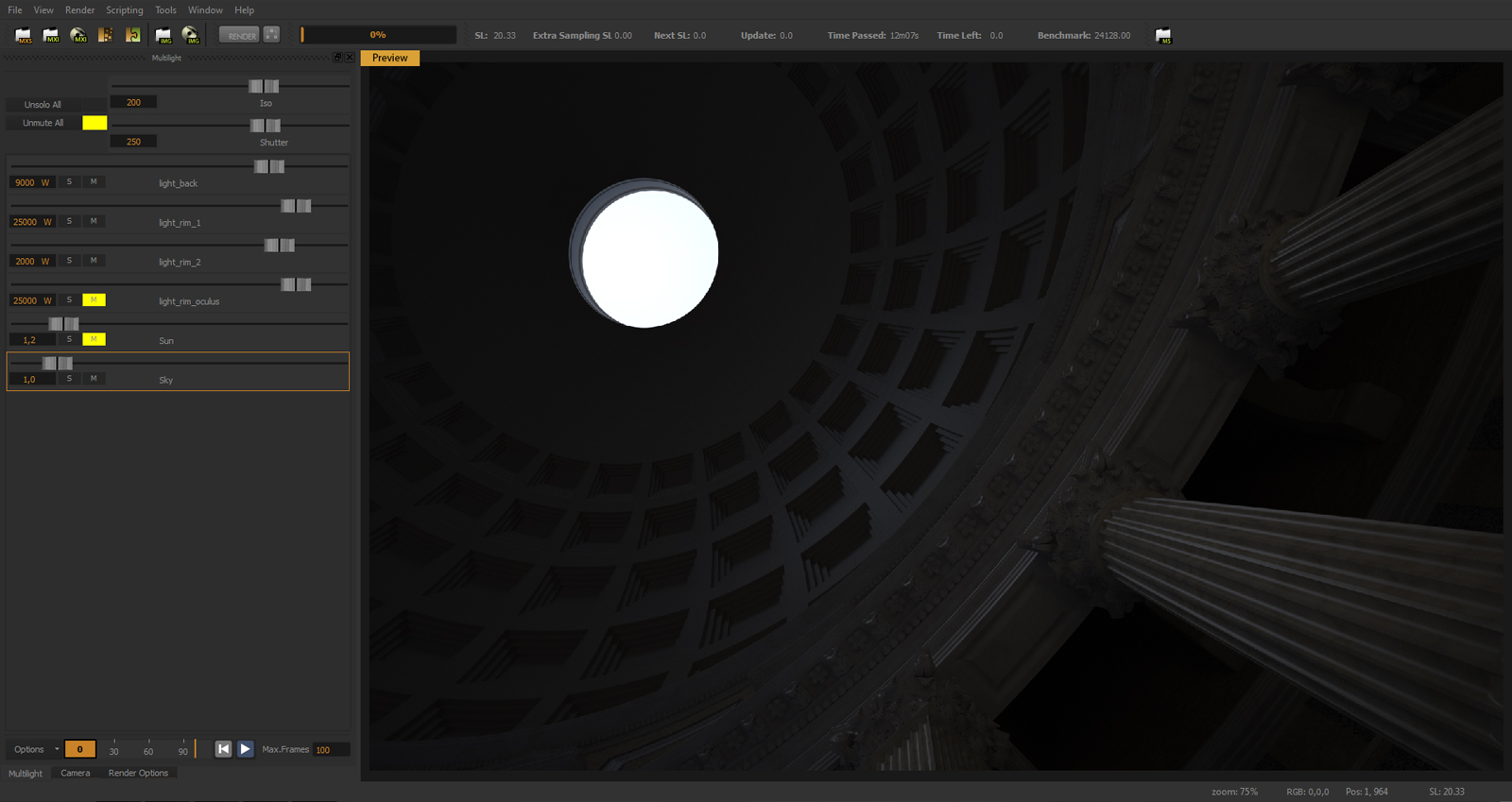 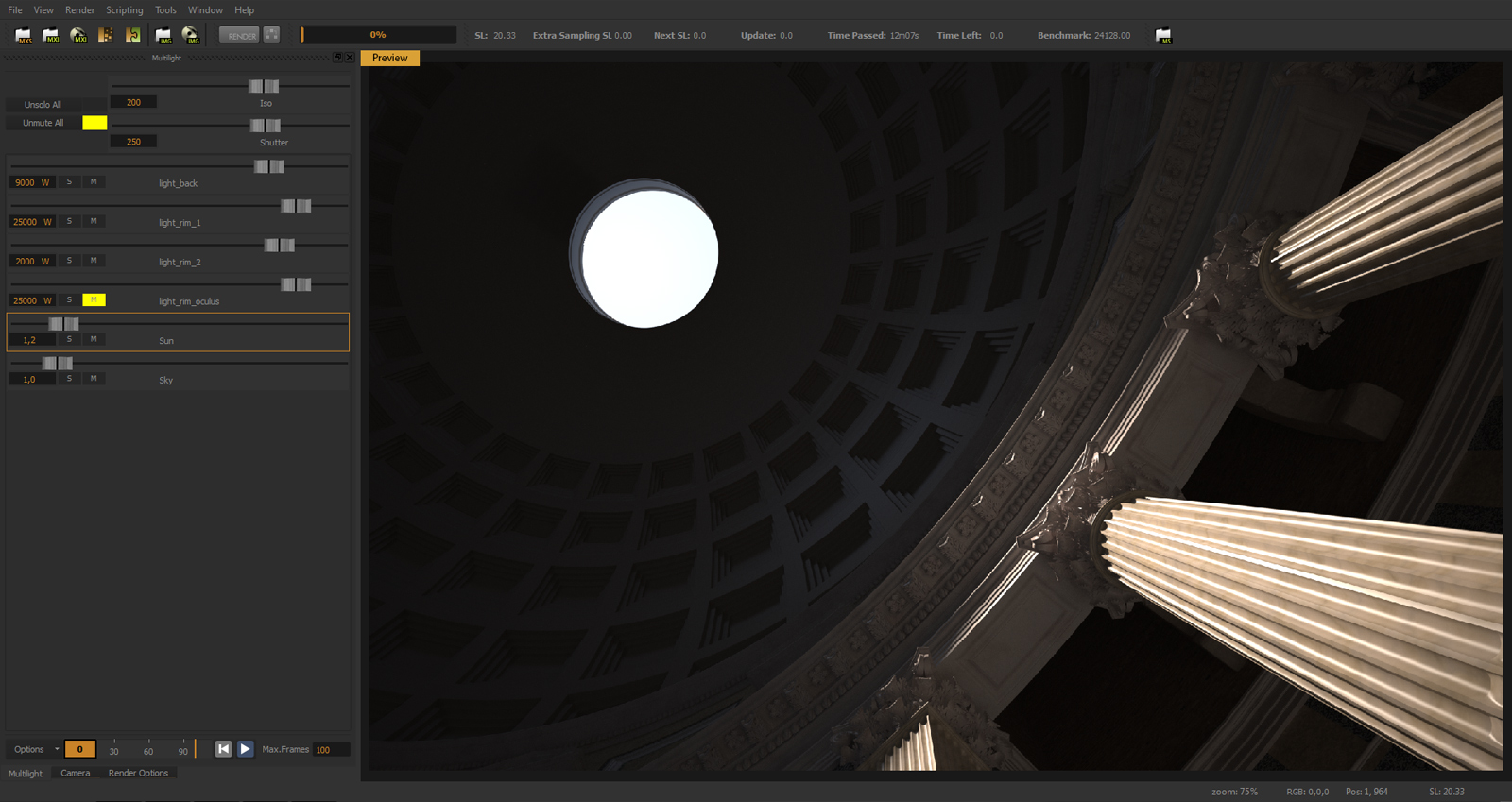 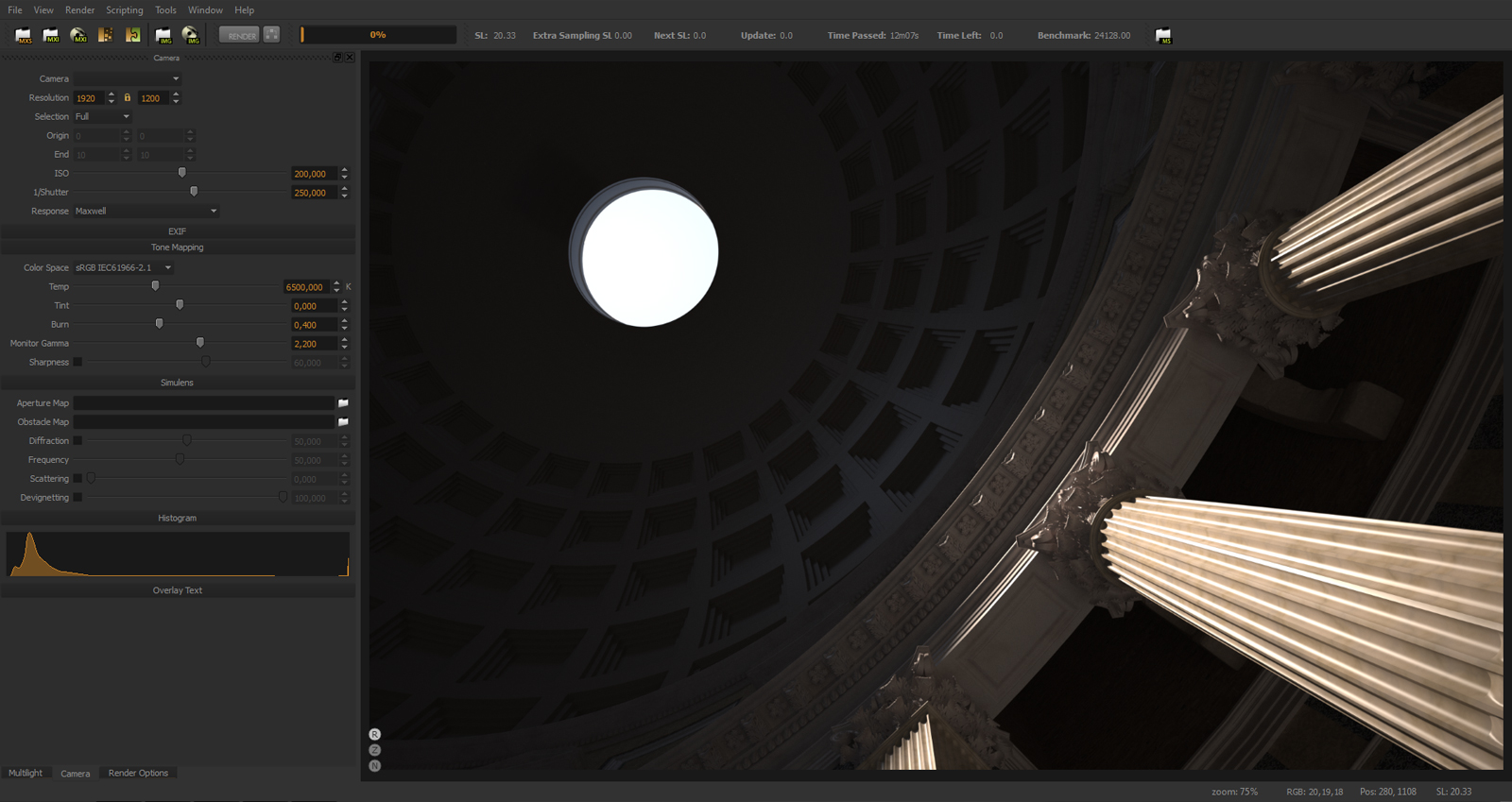 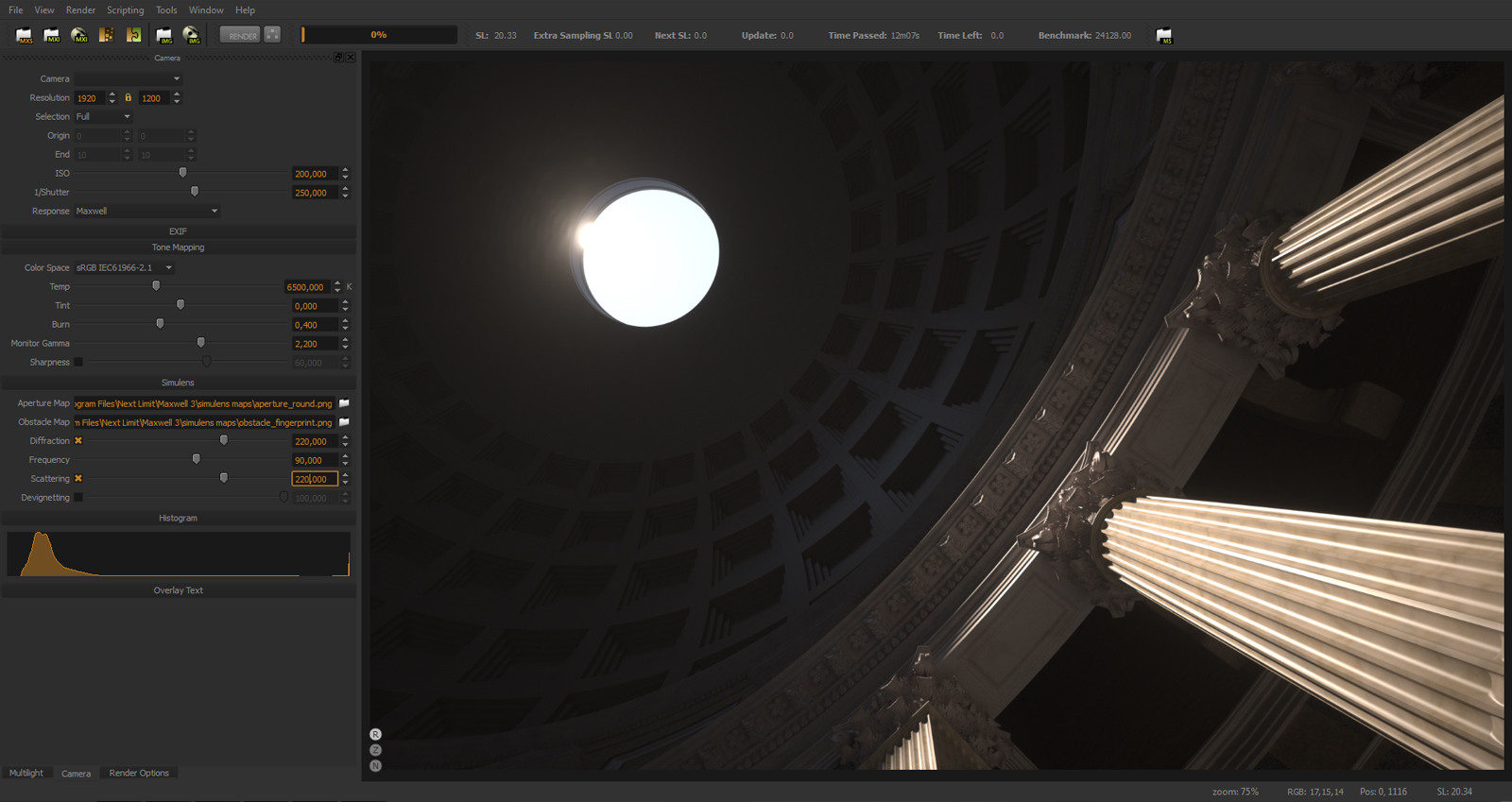 The raw render was saved as a 16 bit PNG file, I only rendered a normals channel pass in world coordinates.

The normals channel was very useful because I could perform adjustments dependent on the world orientation of a surface. 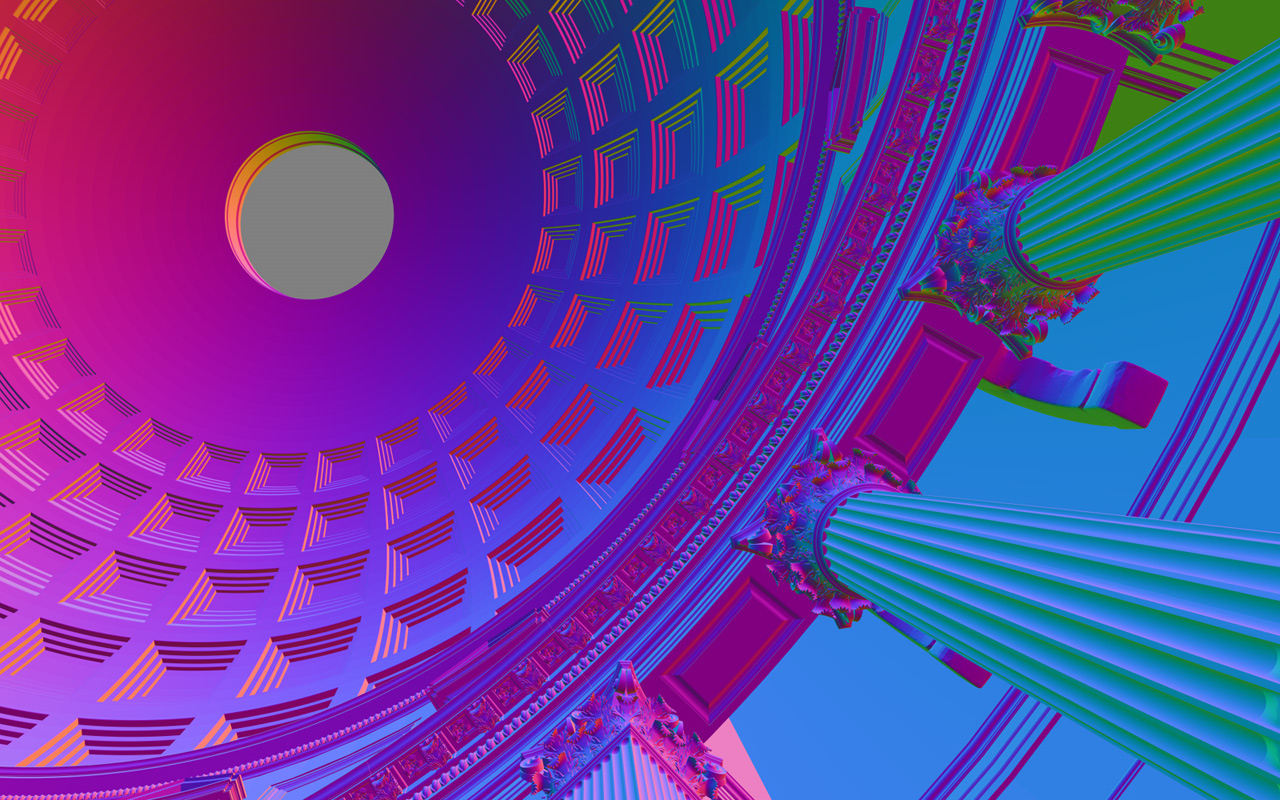 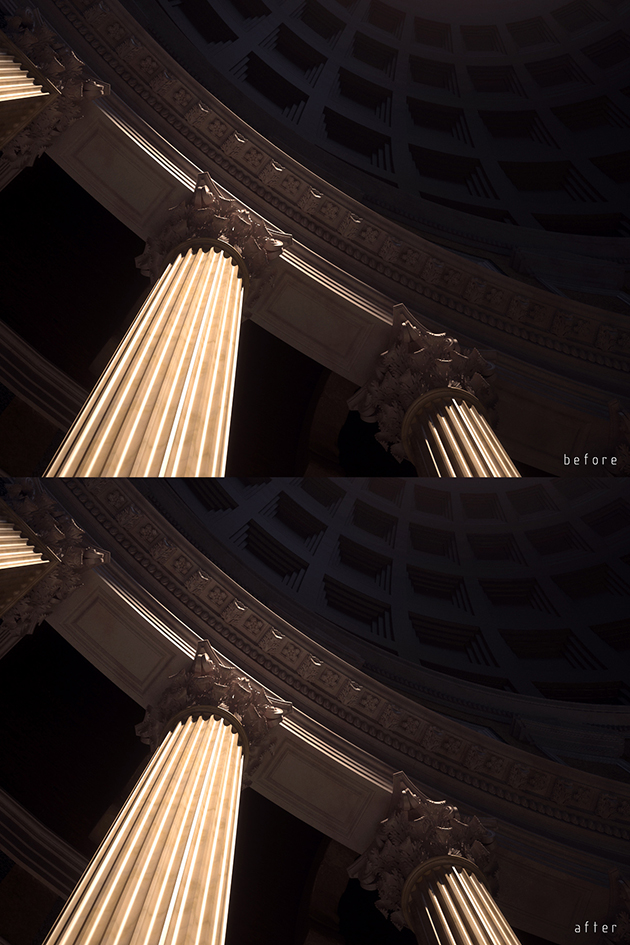 I did the post production in Photoshop, I always like to work in a non-destructive way, so I work a lot with layers. 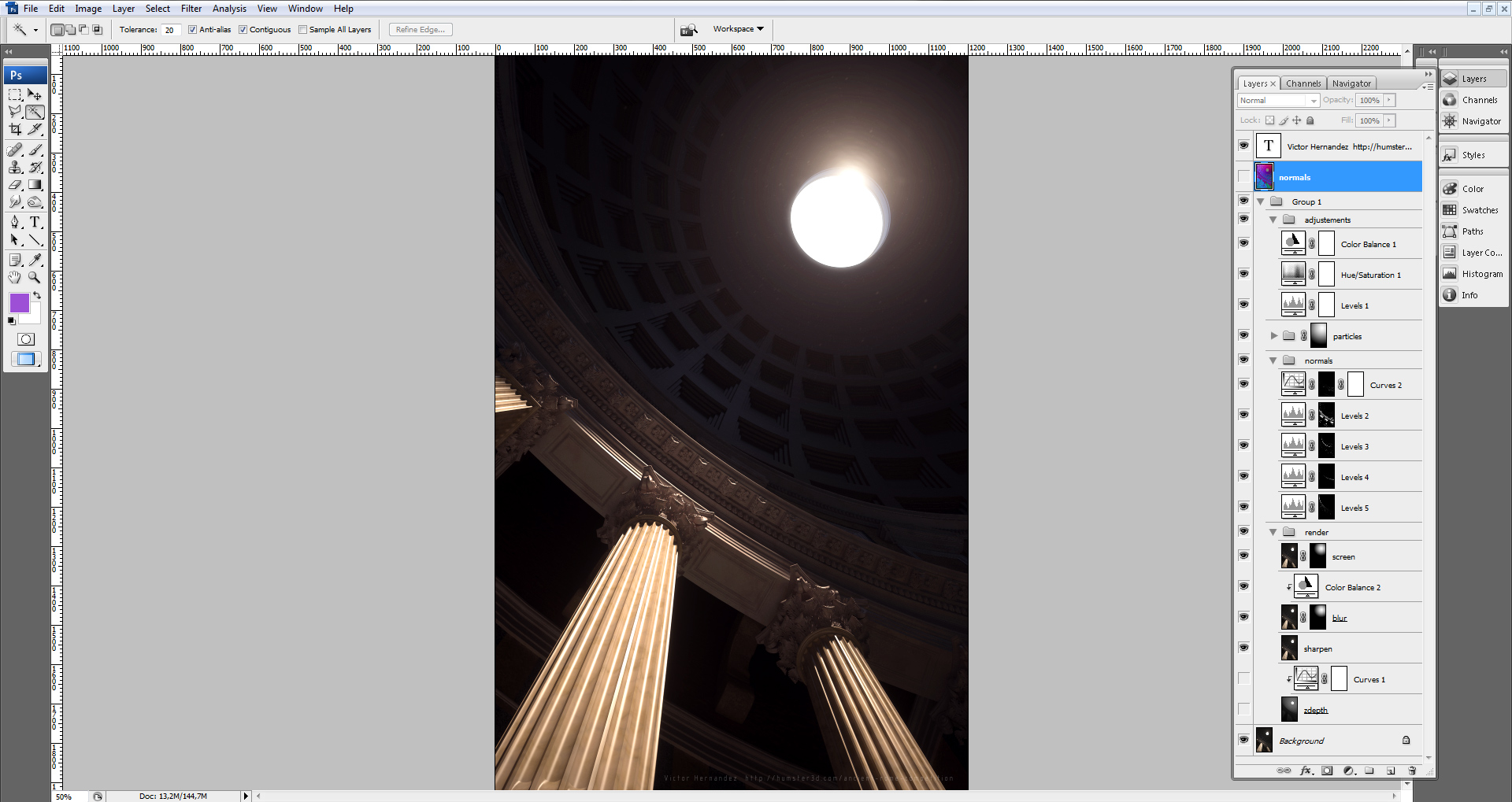 and the final image 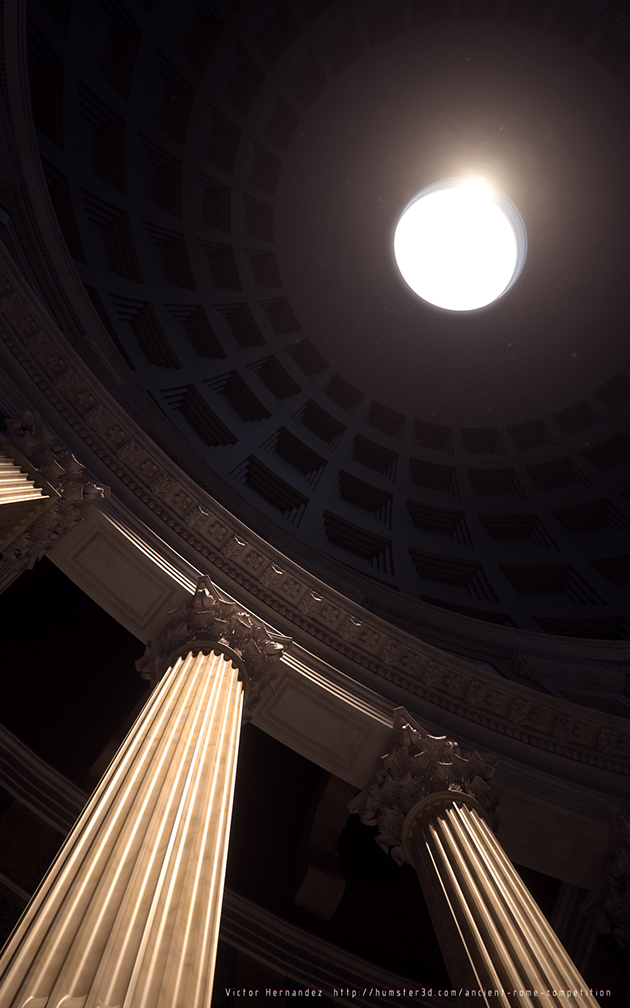 That’s all and thanks for reading. It is been a pleasure to write this making-of, I hope you will find it interesting and helpful for your projects. I invite you to visite my webpage and Facebook page and give me some feedback. 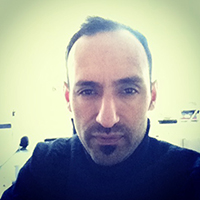 Hello, my name is Victor Hugo Hernandez, I am a graduated architect based in Lund, Sweden. I have been into 3D modeling since around 1995, and have been working with Architectural visualization as a tool on my work as an architect in a number of architectural and engineering offices in Juarez, Mexico and Barcelona, Spain and more recently in Malmö, Sweden. Along all these years I have used several 3D packages, starting with Autocad, 3D Studio Max, Sketchup, Blender and rendering software: Accurender, Vray, Maxwell Render, Corona.