The body of the car was based on the De Tomaso Mangusta, a sports car produced by the Italian manufacturer De Tomaso between 1967 and 1971. The word "mangusta" is Italian for "mongoose", an animal that feeds on cobras - in reference to the Shelby Cobra. The Mangusta was designed by Giorgetto Giugiaro, which is easily recognized by its gull wing doors over the engine and luggage compartment. Also, it had appeared in the movies "Kill Bill: Volume 2" - in silver and "Gone in 60 Seconds" - in white, as well as in the 2001 music video for the song Can't Get You Out of My Head by Kylie Minogue - in yellow. The wheels are borrowed from its successor, the De Tomaso Pantera.

Reason for the modification of the car body derived from the fact that the De Tomaso company had stopped being active and failed to revive in 2012. That said, original parts for the Mangusta (and older cars in general) might not be available anymore. The idea is altering parts of the car using newer technology, while retaining original charm. I decided to swap out certain components of the vehicle and replacing them with new, contrasting elements - such as new lights, openings and acrylic glass wheel arches. Also, that begs the question - should rare and old cars be restored and kept as close as it gets to their initial design? Can the design, and should it, be improved?

The car is placed in a natural setting, and since it's not winter yet, I decided to capture the essence of autumn. As a student of architecture from the university of Zagreb, I am convinced that no car visualization should be without architecture. Therefore I parked the car inside a colonnade influenced by the circular vestibule of the Home of Croatian Artists in Zagreb, Croatia - also known as Meštrović Pavillion. I thought it represented the border between the changed and unchanged environment quite nicely. 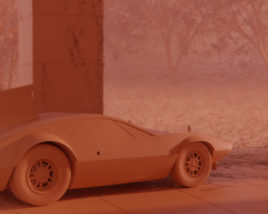 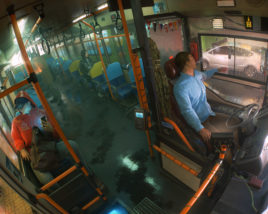 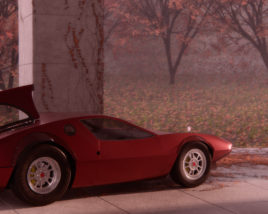 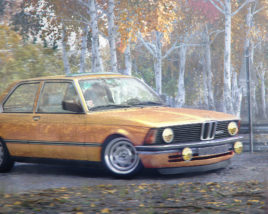