There will come a day when my daughter will see that the world isn't right and ask what happened to it all. The young are given no choice but to learn harsh realities early in this world. She will look up at me with innocent eyes while I have to tell her the story that will break her heart and that in turn will rip mine apart. I won't be able to tell her all the details since we are the losers and the victors on the other side of the wall write our history. What I can tell her will be enough. And probably too much.

The basics of what we know took less than two generations while the harsher effects took much longer. In the beginning crypto-currency creators found a way to break the distribution problem. People were no longer reliant on governments, financial systems or banks to print money. It didn't take long before the disparity between the wealthy and the rest of us began to disappear; where the work we did provided real reward rather than lined the pockets of the wealthy.

The true power behind the financial world quietly went to war with this new system. They found ways to break it, to push it down, to strip it of its usability. Then they went to war with us. It was a silent war without the noise of gun fire, tanks, troops or concentration camps. It was a war with stolen votes, rigged financial crises, stock market manipulation, strategic corporate bankruptcies, rampant corruption, bread lines, poverty on a wide scale.

Eventually the system forced the people into rebellion but they expected this, even helped fuel its beginnings. The police had been militarized, well trained and positioned for just that situation. The rebellion barely lasted a few days while martial law lasted for several years until the people were broken. They eventually forgot there were such things as freedom, privacy or opportunity and people got acclimated to their new life ruled by an authoritarian government. This new system was ultimately governed by the now visible oligarchies that had before only been guessed at by conspiracy writers and through dark stories of the evil behind the curtains. But the worst had not yet happened.

While we lived, dreamed, fought and bled to keep our perceived freedoms intact, and failed to do so, they were building walls. Real walls. They gave us many reasons why they needed it but in the end they were completed and policed and we were left outside. Only the wealthy, powerful or indispensable could live within those walls. Everyone else was left with the scraps of their society and they made sure that poverty was not untended. Generations of entire countries, minus the elite, knew nothing else but the grind of abject survival.

Among all this the planet was slowly, inexorably changing because of our arrogance and irresponsible treatment of it. The world's waters rose, deserts expanded, farmlands shrank, habitable lands became precious and overcrowded. Population numbers began to plummet until nearly forty percent died of numerous maladies and conditions while those walls remained intact.

Most of us now live in stacked concrete housing complexes outside of 'The Walls'. Fortunately I make a decent living as a courier service that runs between the urban paradise behind the wall, out to the near lawless ‘Wildlands’ and the clutch in-between that clings to those walls like a remora. As I get ready for another trip through the Wildlands I can feel a change coming over me as I think of the child growing within my beautiful wife. I now have fear where there wasn't any so I installed new gunner's chairs and rifles to be certain I can make it home. But worse is the need to do more, to earn more, to have more so our little girl doesn't have to struggle to live. I wonder will it be enough and will it ever be enough. Or will I fall into the trap of ‘more’ like the generations that let the world fall because of it?

I will do what I can to give them everything they need and possibly want but I hope I don't lose my humanity in the process. 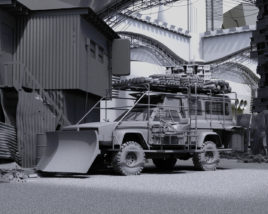 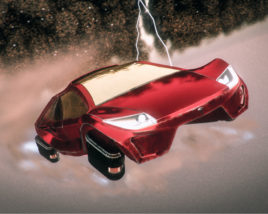 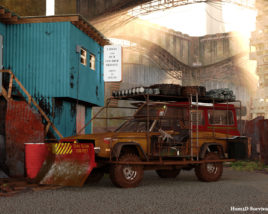 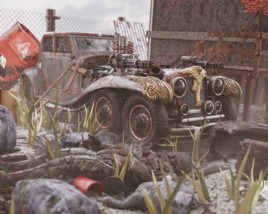