this is my contribution to this year's rendering competition.

In terms of aesthetics and style my picture idea was heavily influenced by the late 70s and 80s science fiction classics and Japanese comic culture.

As a starting point for the futuristic-seeming car my previous modeled 1976 Porsche 935 served me well. I imagined how the race car could look like as a vintage car 100 years later in a modified version. The Porsche 935 therefore strongly got adapted to the technical possibilities in this science fiction world. Thus, the car is usable on the road as well as an aircraft. In addition, the Porsche is equipped with an computer-controlled autopilot, which allows the car to drive independently. In order to enhance the utopian character of the image, my idea was to transfer the vehicle into a strange world similar to a futuristic western city. I would call this place VIDEO VILLAGE.

Several months, which felt like 100 years, I was happily engaged with the project in my spare time and I look forward to coming time travels on foreign planets. 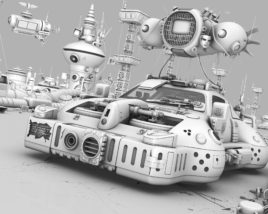 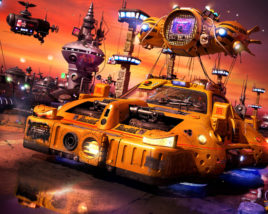 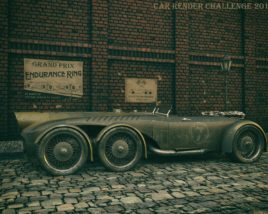