For as long as he had existed, he had been on an endless quest searching for something. For he had existed long indeed, so long he had stopped counting the moons. For you see, this man was immortal. His first memory, countless of your years in the past was that of waking up, gasping for breath in a strange land, where he then lived among its peoples. Before long, he came to realize that indeed, try as he might, he could not die. It was upon this realization that he began to see himself superior to all others, and in him grew a thirst for conquest and domination. In time, many fell to his feet to worship him, many more to serve him, and resistance was run through as effortlessly as a red hot blade through freshly churned butter. The vastness of his stores became unmatched, and in them all manner of precious stones, his favorite being the one you call gold. No effort was spared once he set his cold heart upon something. Though some would disagree, for some thought he did not have one. Yet still, in him grew a hollowness more vast than his wealth and armies. So he left his throne to walk the lands, in search of a thing he did not know. And he lived among many more people for many more years. But where he went, death followed.

One day he came across a young man with a tattoo on his neck, a drawing of one of your eight legged crawlers, who seemed happy beyond anyone he had ever seen, so he decided to observe him. Unnoticed, he followed him to his home. He had nothing much to his name, lived in a small simple house with his expectant life partner and a bike left to him by his late father. Everything about this young man defied his logic. How could he be so happy with so little? Yet he who was immortal, and had owned and done nearly everything under the sun felt so hollow. A deep jealousy grew within him at this thought, and he continued to follow and observe him for many more days, always in the shadows and out of sight. This one particular day, he observed this boy leaving his home on his bike, exuding the most intense joy he had ever seen on a person that his jealousy birthed anger, and his anger, rage. The boy had barely left, when he was slain outside his home. He never got to see his newly born son. It was then that as he was staring down at the boy’s lifeless body, and at the drawing on his neck, that after thousands of years, he too finally died.

The boy’s bike, having loved him just as much as he had loved it, could not bare the grave injustice done to his friend and master. So it dragged its master’s killer into a place of his own creation, created by his own actions. The bones of all who fell by his hand spread to the horizon and beyond the next. His body devoid of skin and flesh much as his existence had been devoid of love and compassion. In this place, he felt the feelings of all his victims at the time of their death. Every regret of a child never raised, every thought of a family left in poverty, the sorrow of leaving an elderly mother with nobody to care for her. All these feelings he felt as if his own. The bike in the form its master had always imagined it, neither in condemnation nor in reprobation, watched behind in silence as he realized what he had been missing all his life, and what he had left in his wake. He would remain here until he came to terms with what he had done. Then he would lose all memory and find himself in yet another strange land, perhaps this time he would spend his eternity differently. To spread love and compassion like he had both done and failed to do, in many other lives, many times before. 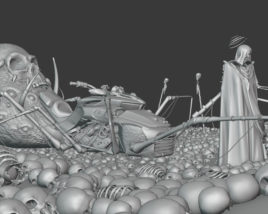 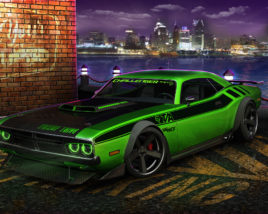 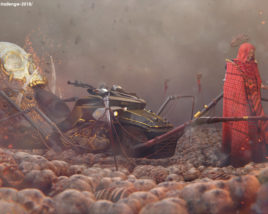 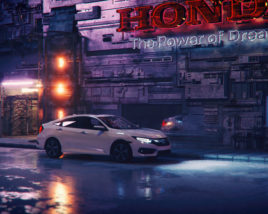